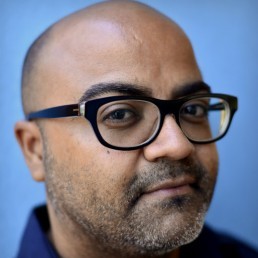 Curaçao visual artist Carl Ariza (1973) is born and raised in Curaçao. From 1994 to 1998, he studies at the Academy of Fine Arts in Maastricht, the Netherlands, and in 2007 returns to Curaçao, where he soon becomes active in the local art scene. In 2010 he is selected to participate in the exhibitions ‘Antepasado di Futuro’ in Curaçao and ‘Festival del Caribe’ in Cuba.

That same year he also paints ‘King of Moderate Ability’, criticizing society for its massive acceptance of inexpensive products of mediocre quality. Bombs coming from the silhouette of a man are aimed at (a mass-produced) coffee table below. Ariza feels misplaced and restricted in a society that accepts money as the norm for success, quality, and creativity.

Carl Ariza grows up in Curaçao during the Seventies and Eighties. The movie ‘Beat Street’ (1984), graffiti artist Jean Michel Basquiat (1960-1988), and Hip Hop music groups like “Public Enemy” had a tremendous impact on him as a young teenager. He becomes increasingly aware of the standards and morals of the establishment, and it also stimulates him to investigate human behavior, society, and established conceptions. His painting ‘I saw it with my own eyes’ (2008) shows a young child looking at a tiny, fragile hummingbird. “A child is ever curious, and this painting is a reminder for everyone always to keep that part of you alive, don’t take things for granted, but always be aware.”

Carl Ariza’s entry for Luciano Benetton’s Imago Mundi Collection in 2013 is a painted and wrapped canvas titled ‘Timid, like a curious deer’. The piece is securely tied with a red string and defies the viewer to open the neatly folded package. Still, when confronted with this piece, who will ignore good manners and accepted social behavior, give in to curiosity and recklessly open the box? When the question is brought before the artist, he looks up and answers, “A child will”.

2013: Text and photographs by Josée Thissen-Rojer. The above text may be reproduced only with reference to the source and author: Curaçao Art®️ www.curacao-art.com. Image rights of the artworks remain the property of the artist.