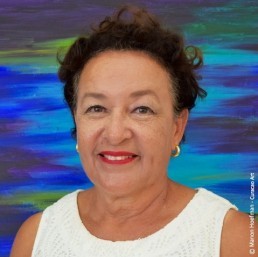 “I think, see and work in lines and planes, but value my use of color the most.”

Yvette Brandt was born in 1951 in Aruba. Her parents were from Curaçao, but her father was temporarily sent to Aruba for work. During that time, three of their children were born, including Yvette. In 1954 the family moved back to Curaçao and Yvette grows up here on the island.

During high school, Yvette attended the Academy of Curaçao, located near the Curaçao Museum in Otrobanda. Based on her portfolio, she was awarded two scholarships after graduation. She chose the one from Sticusa (Stichting voor Culturele Samenwerking: Foundation for Cultural Cooperation) and attended the Art Academy located in the quarantine house at the Caracas Bay. A wide variety of creative courses were taught there, varying from advertising, marketing and photography to the more classical arts of drawing, painting and sculpting.

Yvette blossoms during her education and again creates an impressive portfolio. Based on her work, she receives another scholarship and is accepted at the Leergangen in Tilburg. So, at the age of 20, she packs her bags and leaves for the Netherlands to further her education.

Yvette met her husband very early on during high school, and when she left for the Netherlands he followed her. Even though he’d already started to work back home, he decides to go back to school in the Netherlands. They married in 1973 in Wassenaar and they stayed in the Netherlands together for almost ten more years.

After graduation, Yvette started teaching at a old-fashioned catholic high school, a so-called nun school, in Venlo. Three years later, she switches to a regular high school in Blerick, a small town in the Venlo municipality. Yvette wants to stay in Limburg and would like to a buy a nice little place in the woods, but her husband really misses the island and wants to go back to Curaçao. So, in 1982, they leave the Netherlands and return home.

After being married for almost ten years and still not having any children, Yvette tries to accept that it might just not be possible for them. She dedicates her time to teaching and is truly loved by her students, which gives her fulfillment and inspiration for her own artwork. But completely unexpectedly, she gets pregnant after all. Their son was born in ’85.  Four years later, Yvette and her husband also had a daughter. Becoming a mother after all, was a true gift for her. “I’ve been embraced a lot during my life, literally. Teaching all these young minds for 24 years, you build connections, relationships and friendships. Hardly a day passes by when I don’t run into an old student coming over to say hi to me. Among many other aspects, I really loved the social context of teaching. The relationships with all these children have been a real blessing. Becoming a mother myself on top of that, was the icing on the cake”, Yvette explains with a radiant smile.

Yvette Brandt is an artist with many diverse skills. Her style is ‘different’, as she would say, and can be described as a combination of abstracts and semi-realistic. Early on, one of her teachers encouraged her to work with three-dimensional media, telling her that sculpting really seemed to highlight her talents. For years, she created sculptures made from bronze and ceramic and she was able to master the technics of casting bronze objects herself. But due to some health issues, she had to give up this artform and she started focusing more on her painting again.

She is skilled in several techniques and loves to paint with watercolors as well as with acrylics and oil paint. “I think, see and work in lines and planes, but value my use of color the most. Personal situations and life events are reflected in my work. Life influences my art, emotions are very crucial, the psychological side of things. The relativity of life – we’re here, just for a while – is important motivation for me. I won’t be around forever, but with my art I do leave some traces behind. But more than anything, I hope people just enjoy looking at it.”

Yvette says that nature, people and the interaction between both are a great source of inspiration for here. Especially the sea is very important to her. The light, the color and the movement of the water is a recurring theme in her work. “I myself am also very active, I can’t sit still, and I have many divergent interests.”

‘Purple Grace’ is one of her favorite paintings. It clearly shows a combination of these themes and inspirations.  “The sea, the North Coast, the depths and wave movements are what inspired me in this painting. The color choices of the deep purple and bright green – instead of the obvious blues – is wat challenged me in the process. I really love how it turned out, and for now, I am very happy it hangs in our own living room, so we can enjoy it every day.”

Text and photographs by Manon Hoefman.