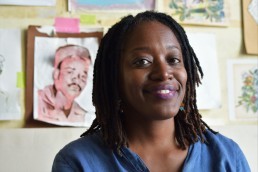 Avantia Damberg (1977) was born in Leeuwarden, in the north of the Netherlands; however, both her parents were originally from Curaçao. During their years in the Netherlands they often felt homesick and missed their families considerably. Hence, when Avantia was seven years old, they moved back to the island of their roots.

Here, Avantia grew up in Rooi Santu and attended Radulphus College. At the age of nineteen she moved back to the Netherlands to go to college. With the ambition of starting her own business, she studied Commercial Economics at Fontys in Eindhoven. It seemed to be a sensible choice. However, unfortunately, she did not enjoy her studies at all.

This changed for the better after she had met some fellow students who studied at the IVA (the Industrial Design Academy in Eindhoven). The possibility of a professional creative career really appealed to her because it felt as if her own creativity had been dormant for so long. And suddenly, it was wide awake. However, she persevered and completed her studies at Fontys. But in the meantime she had started putting together a portfolio and after her graduation she was accepted at the Gerrit Rietveld Academie in Amsterdam.

Initially, she enrolled for the short educational program, however she ultimately switched to the fulltime program. She has attended Rietveld for five years and truly enjoyed her studies. The Art Academy was her playground, a place where she truly felt at home. “Every course broadened my perspective, broadened my … whole being”, Avantia explains with a twinkle in her eye. “I learned to think conceptually and, perhaps even more importantly, how to convert those conceptual thoughts into art!”

After graduating from the Rietveld Academy she started working in the cultural, creative sector of Amsterdam. However, due to the continuous lack of budget and funding, it was hard for her to find her way. In the years after that she had various jobs, often combining her commercial skills and her artistic background. For example, during her work for the Virtual Museum in the Zuid As. Unfortunately, the museum lost its funding due to cutbacks and ceased to exist.

When Premsela, the Institute promoting Dutch artists for design and fashion merged, all doors in the art world seemed to close and she was unable to find a new opportunity. By then she started feeling lost and overwhelmed by nostalgia for the island and her parents. Hence, in 2012 she returned and in hindsight she regrets not going home sooner.

“It was hard, having to start all over again, but through the years I did visit the island and I even had a few exhibitions. The Curacao art scene has always welcomed me with open arms.”

Avantia is a conceptual artist. She is always exploring, searching for beauty and quality, in a very playful way. “People on Curacao seem to have different expectations when it comes to art. The majority seems to expect something beautiful and realistic, painted in bright colors, but I like to break through these barriers. Stimulate people with different concepts. Hold a mirror up to them hopeful that they will recognize themselves. For example, my collage tiles. I use all kinds of different materials and techniques to create an image: magazines, printed digital images, Photoshop, vintage images, botanic drawings, dried plants or flowers… I glue my materials on a tile, glaze it and let it harden.”

I did a series of the Women of Curacao, using mainly dark-skinned women in my collages, but I also started a series of self-portraits. Selfies manipulated with SnapChat technology mixed with techniques of famous painters. My experiments also include the morphing of portraits of grandmasters and my selfies. The idea came from the artist Durham, who switched his head with that of famous portrait paintings, using SnapChat. I love progressive techniques like that. It gives you a different perspective on art, less boring.”

Avantia is also known for her sculptures and she is just as eclectic in this art form. “I work with all different kinds of materials. To me, it always starts with the idea, the concept. Once that has taken shape, I start looking for the right material for it. To me, art is an outlet and a representation of what is going on in our society. At least that is what I would prefer it to be. Art should reflect our interests and concerns.”

Avantia believes that art can put people on a different track. Religion is an important source of inspiration to her. She was raised according to evangelical beliefs, with a broad interest in bible studies and she always tries to express her faith in her art.

One of her favorite art pieces is ‘Map of Curaçao’, an artwork that consists of the shape of our island with the family names of Curaçao placed at their geographical origin. Over the years, this exceptional conceptual piece has been created in three different versions. She created the initial version for the exhibition ‘Exploring the past to envisage the future’ at the Curaçao Museum in 2014, which was made of paper. “I love installation art but apart from that, this piece was definitely a milestone to me. It was my first major public work of art and what is unique about it, is that the commission was repeated twice! Because the paper version did not travel well, I was commissioned to create a second version for Kranshi and this time I created ceramic name tags. The third version is on display at Blue Bay and was commissioned by the Blue Bay Sculpture Garden Foundation. All surnames are stamped on coral and embedded in an “island wall”.

“The Idea came to me after having attended a lecture of Albert Wiels at NAAM (National Anthropological Archaeological Memory Management) about the provenance of names and their alteration over time. The idea grew into a concept and I started mapping the origin of family names on Curaçao during the abolishment of slavery in 1863. I included all surnames that occurred 10 times or more and some that are inherently typical to Curaçao.”

The first version of ‘Map of Curaçao’ at the 2014 exhibition was interactive with an audio loop. All names were read solemnly and there was a box in which you could deposit your family name and residential area. “The whole concept just clicked. Everyone seemed to understand it. It conveyed a message of togetherness and everyone being equal. We are Curaçao and Curaçao is us.

Text and photographs by Manon Hoefman (2019).

Click here for her 2018 artist in residency in St. Kitts and Nevis.