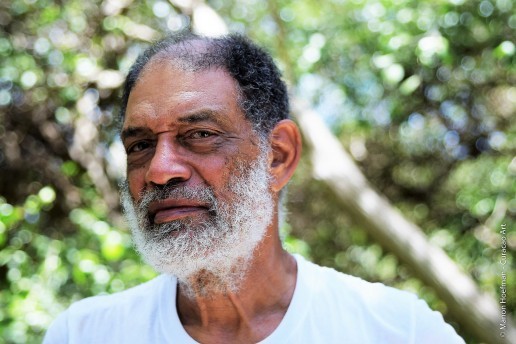 “Each creation is a new challenge in terms of color, shape and technique.”

Artist Richard Doest was born in Curaçao in 1942 and grew up in a townhouse in Julianadorp. This neighborhood was an expansion of Negropont Island, which provided housing for personnel of CPM (Curaçaosche Petroleum Maatschappij) and CSM (Curaçaosche Scheepvaart Maatschappij). His father was Chief Engineer of one of the oil carriers that sailed to Venezuela every week. When CPM got downsized in 1953, his father lost his job and the family moved to the Netherlands. Not long after their emigration, his father died in 1955, leaving his mother on her own with their three sons.

In 1965, Richard returns to Curaҫao and starts working for the Shell oil refinery. Even though he graduated from the HTS in Amsterdam with a degree in mechanical engineering, he started out as ‘just’ a foreman and quickly ran into a lot of resistance from his Dutch supervisors. Although they had been able to obtain management positions, they barely had an education, and did not appreciate a ‘local boy’ with this kind of knowledge and education. Furthermore, Richard had married a woman who, just like him, was from Surinamese descent, which made him even more difficult to control. In those days, most Antillean men returning to Curaҫao came back married to Dutch girls and could be influenced indirectly through the women’s clubs and social events, but not Richard. He didn’t give in to company politics and firmly held his own, slowly working his way to the top.

One night in Amsterdam, while walking in the snow, he met an African man. They started talking about their past, their future and their cultural heritage, and the man introduced Richard to Highlife Music, a music genre that originated in West Africa in the early 20th century. Richard became fascinated by it and taught himself how to make the musical instruments used for that type of music. To this day, he enjoys making them into a work of art.

Richard doesn’t see himself as an artist. “My art is pragmatic. I work with ratios, not emotion. My urge to find out how things work is what drives me. Whether it’s drawing, painting or making musical instruments, if I don’t understand or I can’t master a particular technique, I will continue to practice until I’m able to do it, and do it well. Take painting, for example. For me painting is like untangling a rope, trying to get the knots out of it. Depicting a texture or an expression is a process, you just have to get it right. The challenge is the creation itself. I am emotionally connected to my work while working on it, but when it’s finished, I can easily let go of it. The best way to be objective about your own work is to look at it in a mirror. If people ask me for advice, that’s the best advice I can give them. Mirror your work”.

‘Ki dia?’ is a painting of man with a straw hat. He has a compelling look, almost begging for answers. The teeth missing from his mouth seem to strengthen his question: ‘When?’ – which is what ‘ki dia’ translates to from Papiamentu-. “Working on the straw hat gave me great pleasure”, Richard explains. “Painting is lying on paper. You have to create the illusion of the texture, it took me forever to get it right and I loved the process and the result, that’s why it is one of my favorite pieces.”