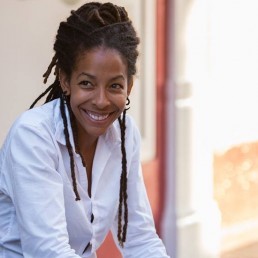 Sharelly Emanuelson (1986) is a filmmaker and video artist. She acquired her B.A. in Audiovisual Media from the HKU University of the Arts Utrecht, followed by a M.A. in Artistic Research at the Royal Academy of Art, The Hague.

In her films and video installations Emanuelson’s focus is to document and represent the many perspectives and experiences of the Caribbean region.

She exhibits internationally, notably in Stedelijk Museum Bureau Amsterdam (2016) and the Museum of Fine Art in Croatia (2018). Her Documentary film “Su Solo i Playanan” (2010) won an audience award at the Africa in the
Picture Filmfestival (2012) and her most recent films have been shown at the Curaçao International Film Festival Rotterdam, Curaçao IFFR (2018).

Emanuelson is also the founding director of “UniArte”, a non-profit, artists led incubator space that works to contribute to a fertile and sustainable environment for art to flourish in a contemporary Caribbean context.

2018: Text and photographs by Sasha Dees.