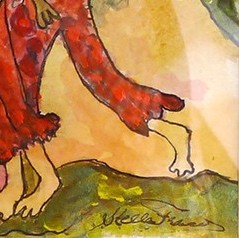 Stella Fraai (1936-1920) was born in Curaçao. She moved to the Netherlands in 1955, where she became a teacher. With training at an academy and private lessons, she began to develop her own style, which resulted in the colorful and exuberant artwork that she makes.

Stella’s technique is to prepare a canvas or a piece of paper with watercolor before starting to draw. Watercolor binds to the paper or canvas, and cannot be altered. Her drawing is then strongly guided by the lines and shapes that appear in the outcome of the coloring. Her first set up is in charcoal, which can be erased if necessary. Then she will use various materials, such as chalk and ink, to create the final version.

Stella is inspired by everything she sees around her, mostly people, animals and nature. She especially loves the outdoor life of Curaçao: it gives her a feeling of freedom and openness. Shapes, lines and colors of what she sees around her inspire her as well. ‘‘During my youth, I didn’t learn a lot about the island at school. So I had to discover it myself. I used my eyes and my imagination.’’ Stella learned to look at her surroundings in her own way and began to take photographs of everything that inspired her.

Other artists inspire Stella as well. She loves visiting different galleries to see the art of others. A famous artist that has inspired her is Marc Chagall, a French painter from Jewish-Belarusian descent. He let go of realism and developed his own style. Often identified as a surrealist, his work actually falls under various art movements. This is something where he and Stella definitely share similarities when it comes to having a unique style.

In the course of years, Stella visited her homeland often. She was surprised by the fact that there were hardly any typical Curaçaoan things in the shops. Everything was focused on the Dutch merchandise. ‘‘I then started to develop postcards for a book store and they were very enthusiastic. It inspired me so much that I could share my creations with others. It made me very happy, and one thing led to another.’’ In 1995 she had her first exhibition in Curaçao. More exhibitions followed, also in the Netherlands.

In 2011, Stella contributed to a storybook in Papiamentu. The book titled ‘Kuenta di tur tempu’ (translation: Stories of all times), contains drawings by different artists. Stella made drawings for the fairytales ‘The shoemaker and the owners’ and ‘Jack and the beanstalk’. The drawings she made are typically Stella, but the colors are somewhat different: a little less exuberant and intense. This time she let the story take the upper hand. ‘‘It was more difficult than I thought it would be. Normally I am not stuck to a certain story. But it was definitely very nice to be able to participate in this beautiful book.’’