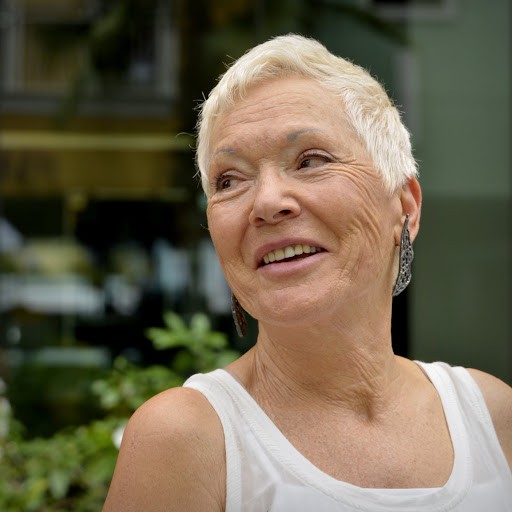 “Painting is an innate activity for Midzy Longuevergne. Her passion for art arose when she was a child. Her style is rooted in her French parentage. To this she added her love for the Dutch light. Her current inspiration is the Expressionist style.
Midzy’s passion led her to travel around the world. She painted her way through Afghanistan, Indonesia, North Africa and Latin America.
For the past 18 years she submerged herself in the magical effect of the incongruity  of Curaçao’s culture: The Beauty and the Mess”. (From: artist statement of Midzy Longuevergne)

In 2006 Midzy did a large solo exhibition at Landhuis Bloemhof, a retrospective of 10 years living on Curaçao. Titled, ‘Dix Ans Curaçao: Bida ta un Karnaval’ (Ten Years Curaçao: Life is a Carnival), it showed her paintings, photographs, drawings and 3 dimensional works. With this exhibition she also wanted to express her gratitude to the island, for all it had given her.

In the past years Midzy has participated in several group showings amongst which the prestigious ‘Island Reflections. The Contemporary Art of Curaçao’ at the Dupree Art Centre in Michigan (USA) in 2011 and more recently ‘Back to Nature’ at Landhuis Bloemhof, Curaçao (2013).