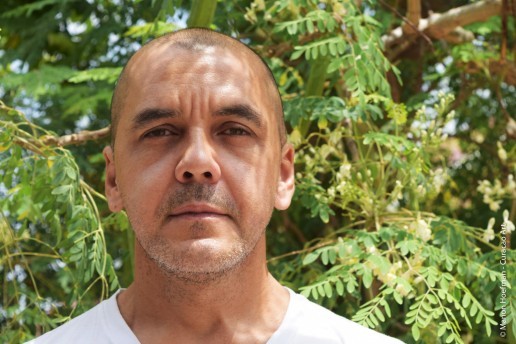 “For me creating art is a primary need, the emotions it evokes in others still amazes me.”

Garrick Marchena was born in 1966 in Aruba, but his parents moved to Curaçao before his first birthday. Here his sister and brother were born, and he grew up in this family of five. His mother worked as a wedding gown seamstress, and because of her talents as a sketch artist, she would always draw the bride wearing her design before she would start sewing the dress. Garrick often observed her while she sketched and also started drawing from a very young age.

Creativity felt very natural to him, but his father wanted a solid future for his eldest son, convincing him to attend the MTS after finishing high school. Garrick’s interest in architecture was still too creative for his father, and he encouraged his son to study Civil Engineering Technology instead. Garrick left for the United States at 21 and attended the University of Pittsburg to get this degree.

One year before graduation, his mother died, and even though Garrick wanted to stay in the United States after finishing his degree, he came back to Curaçao to be with his father. During his years in college, he was in a relationship, and Garrick and his girlfriend had a son. The relationship didn’t work out, but Garrick played an active role as a father, and after moving back to the island, his son ended up living with him permanently.

Garrick started working for the road building company CWM (Curaçaose Wegenbouw Maatschappij) as an engineer but was very unhappy in his work. He craved creativity, and after 18 months he couldn’t take it anymore. He quit his job and started working for the graphic design company his little brother had just started. Unlike Garrick, their father had allowed his younger brother to attend an Art Academy, where he had studied graphic design. Garrick didn’t know much about desktop publishing or the graphic arts. Nevertheless, he caught on quickly and learned it all on the job. It was hard at times, but to enjoy work and to be able to work with his brother was a true relief after his time at CWM.

Even though he had found some creativity in his work, the drive to create his own art became a primary desire, but he hadn’t found the right outlet yet. During his teenage years he had become a skilled portraitist and growing up in a hip-hop scene he had also developed a great interest in graffiti. It just never occurred to him, back then, to combine the two. He loved working with spray cans, but he never liked the concept of vandalism, and just displaying symbols and text never gave him a real fulfillment in his art, but neither did the painting of family portraits.

In 2006, the world-wide movement of street art had come to pass. Graffiti art was no longer limited to text and symbols but had developed into beautiful imagery murals. Garrick got especially interested in the movement in California. They didn’t limit themselves to just spray paint but used all kind of paints and materials to get the desired result. Garrick started to experiment with this concept and found his true calling.

Garrick seems to prefer children and animals, especially birds, as subjects for his murals. He enjoys conveying a message of innocence and freedom. He wants to awaken emotions as well as raise consciousness. For example, his first mural of a bird was near a dump site at Boca Sami. “I wanted people to be more aware of their actions. Hoping that by showing them the beauty of nature, it might open their eyes and make them reconsider leaving their trash”, Garrick explains. Selikor loved the sentiment and commissioned Garrick to paint six more bird murals around the island at similar sites.

Within a few years, his technically illegal graffiti was perceived as he intended: a gift to society. And to this day, all his early murals are admired and respected for the art they really are. These days, Garrick receives various assignments for murals, but is also using his mural techniques on canvas. “My work evolves every day and I’m interested in developing more classical methods as well, like painting with oil paint, using the techniques of the old masters.”

‘Urban Angel’, was Garrick’s first public mural, and for that reason, is still one of his favorites. “This whole journey started with this first one. Going through a bad break up, I was very emotional and needed an outlet for my feelings, but I wanted it to be mutually beneficial.” He chose a backdoor at the end of a small alley at the Elias R.A. Morena Boulevard in Saliña. “The neighborhood was very restless in those days, robberies, shootings, fighting… I wanted to offer some protection, to create different emotions by adding something beautiful to the urban scenery.”

“On the Sunday morning of the Children’s Carnival Parade, I figured everyone, including the whole police force, would be in Otrobanda for the day, and Saliña would be quiet and deserted. I got completely lost in my work, and at first, I didn’t notice the security guard walking up to me. When I spotted him over my shoulder and finally found the courage to turn around, I found him motionless looking up at the mural in awe, making no attempt to stop me or to send me away. At that moment I realized I was doing something special, I was creating something unique. It felt totally different from signing my name in graffiti on an empty property wall. It felt like I was really creating art.”

Text and photographs by Manon Hoefman (2018). This text may only be reproduced with reference to the source: Curaçao Art®️, www.curacao-art.com. Copyright of the artworks remains the property of the artist.