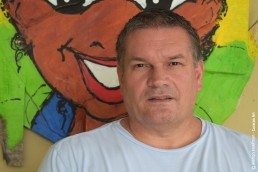 “The bright colors and the black lines in my work might reflect the contrasts in our culture”.

Artist André Nagtegaal was born in 1967 in Curaçao and raised in the residential area of Janwé. He and his wife still live in this neighborhood, and so do their son and granddaughter, who live just a few houses down the street. Their daughter lives in the Netherlands.

Growing up in a close-knit community like Janwé, he had a strong sense of community, but didn’t see many opportunities for his own future. After finishing high school, his priority was to earn a living and make some money. He started working for the newspaper Ultimo Noticia, and later switched to La Prensa, where he worked for 20 years. Even though he didn’t have any education related to this field, he was good at what he did, and he learned to be a desktop publisher on the job. His talent was obvious and he was offered several educational programs and courses abroad to further his skills. To this day, he still works in this field at the art department of the Amigoe.

André always had a tendency toward creativity, but it wasn’t until 2002 that he started to paint. Before that, he just never had the time to develop his artistic side, or to follow that passion. Ever since high school, he had been working hard, often two jobs at a time. But when one of his endeavors came to an end, he finally had some free time, and he started painting. He created some small paintings on little cardboard plates with scenes of the traditional harvest celebration called: Séu. He enjoyed the work very much and before long he created his first large painting on canvas.

André had instantly found his inspiration in the island’s culture and traditions, but his style of painting did change in the process. Initially it was more impressionistic, but it unfolded into something else once he immersed himself in the work of artists he appreciated, such as Pollock and Jean Michel Basquiat. Subconsciously he took over the technique of working with thick black lines, but he developed it into his own style. Combining the black contours with what André calls: ‘the colors of the island’.
André had always been fascinated by façades. The way the sun illuminates them and how daylight brightens the colors and increases the contrasts. This unique color scheme inspired him and was incorporated into his work. Combining this new-found technique with his predilection for the traditional Curaçao culture his ‘DjiDji style’ was born. He named the figures of his new style after his grandmother, who he actually called Chichi. Chichi is a strong symbol of the past, a concept that was used for the eldest daughter who took care of the family, but because that term was already being used for the female sculptures you can buy as a souvenir, he changed Chichi to DjiDji.

His vocation to preserve history, to uphold tradition and to save the island’s cultural heritage, became the biggest drive in his art creation. He tried to study the cultural customs of Curaçao and did some research in the library but couldn’t find much information. He visited some local museums and via the Tula museum he met some of the earlier families of Bandabou. He had his own memories, which he often used, but he had almost nothing tangible, so he visited them in the countryside to photograph the landscapes, their old tools, and ancient musical instruments. He tried to document more and more of the history of Curaçao, using all of it in his work.

The ‘kunuku’ – as we call our countryside and farmland in Papiamentu – and life in the olden days, became his central theme, but after painting every possible part of the culture and history he could think of, he felt free to broaden his horizons. He started to paint regular portraits of his DjiDjis, as well as DjiDjis in modern life settings. Nowadays he even does commission-based paintings. “It felt like I had fulfilled my inner sense of duty and was now also free to explore other things”, André explains.

“The bright colors and the black lines in my work might reflect the contrasts in our culture, but the DjiDji figures were always the main subject matter of my paintings, their surroundings or background were always secondary. I’m currently interested in painting them in more current life themes, even political or taboo subjects that may be important to our society. For example, like the LGB – Lesbian, Gay & Bisexual – DjiDji’s I painted for Curaçao Pride. I was raised very conservatively like most of us on the island, but as I grew older I was able to broaden my perspectives and these days I feel compelled to break certain taboos and help get rid of the ignorance. I truly believe that by providing education, information and positive reinforcement, we can shift the paradigms of our youth.”

Once he became more successful, André felt very strongly about giving back to society, through charity for example. One of his favorite pieces was a large painting, 120 by 90 cm, that he donated to an auction for the cancer foundation. It was bought by a banker, who in turn gave it to his daughter, a breast-cancer survivor.

“It is called ‘Victorious Women’ and depicts three women who are battling cancer, and all have a different age, race and social class. It is supposed to convey the message that cancer does not care about your economic status or your origin, it can affect all of us. Such a universal message makes this work very special to me, that’s why it’s still one of my favorites.”

Text and photographs by Manon Hoefman for Curaçao Art.
September 2018