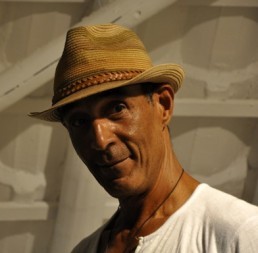 Besides being an artist, Felix de Rooy (1952) is a poet, writer, dramatist, filmmaker, director and curator. In De Rooy’s case an evaluation of his artistic achievements is not complete without taking his whole oeuvre into account including the films, theatre productions and curatorial projects.
He studied at the Vrije Akademie Psychopolis in The Hague and received his MA in filming and directing at the New York University in 1982. From his multi-disciplinary background he makes collages, assemblages and installations and so frequently giving statements on the inheritance of slavery with the aim to keep debating on this black page in the history of humanity and not conceal it. In his monograph Ego Documenta (2012) Felix de Rooy describes his background poetically: “As an inheritor of colonial orgasm, as an unrecognized bastard erased from the European Testament, I escape from the prison of genetics and historical identity.”

He also writes: “In my blood flows together: Amazon Indians, African slaves, slave-owners, and abolitionist from Holland, Germany, France and Portugal. In my heart the strife between racial and cultural identity is over. I feel the menacing silence between my African grandmother and my European grandfather, a truce between shame and desire, disgrace and guilt. I read the bible and Xaviera Hollander, polish my Benetton consciousness and sip my Max Havelaar solidarity coffee from Delft Blue cups. I am aware of my vulnerability, my mixed identity. I am torn between sexes, races, cultures and religions racing through my blood emerging like hot water in feverish dreams and visions.”

De Rooy’s earlier paintings, drawings and other two-dimensional work are influenced by artists like Aubrey Beardsley (1872-1898), Toulouse-Lautrec (1864-1901) and Jan Toorop (1858-1928), who were all re-discovered in the Swinging Sixties. He adapted their style into his own work. His work often refers to Greek myths, the Madonna and child and other Roman Catholic subjects, and quotations from Leonardo. However brutal or poignant the subject of a work may be, it is expressed in colorful, dreamlike, sensual imagery in which the human or mythological figure often takes centre stage. De Rooy calls his work Psychic Realism. It is the struggle and lovemaking between the two gods Eros and Thanatos that creates visions resulting in images akin to surrealist and magical appearances. It is constant oscillation between loving and dying at the same time. He strives for spiritual enlightenment and an understanding of the world, and is thus engaged in a process of philosophical reflection and cultural research. Early in his career he referred to Norman de Palm as his muse. Together they made the movie Ava & Gabriel (1990). The film was awarded the prestigious Gouden Kalf award at the Dutch Film Festival.
Nowadays he finds inspiration out of his collaborations with Kirk Claes.  Their most recent projects are a portrait on 10 Curaçao artists for the exhibition ‘Island Reflections. The Contemporary Art of Curaçao’ in 2011, and a documentary on Curaçao visual artist Ellen Spijkstra titled Roest & Koraal (Rust & Coral) in 2013.