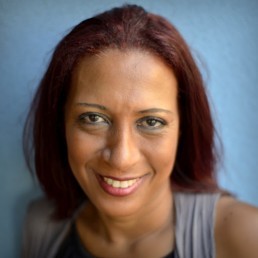 Her paintings are colorful and imaginative. She depicts mostly women, surrounded by a variety of symbols like the sun, cactuses and all kinds of small animals. The public appreciates her work for its bright, joyfull colors and its apparent lightheartedness.

Suzet Rosaria (1965) was born and raised in Curaçao. In the course of her high school years one of her teachers recognized her talent and encouraged her to apply at the fine arts academy in the Netherlands. During the seventeen years that she stayed abroad, she maintained a strong bond with her native island. Her roots are so firmly planted in Curacao that during her training at the arts academy, she would never paint the picturesque Dutch mills, farmhouses or the canals. Instead she prefered Caribbean scenes, related to her youth in the tropics. She finally returned to Curaçao in 2001 and has since been exhibiting and participating in events with regularity.

She developed her colorful style in her last year at the arts academy. Her paintings are filled with people, mostly women. The figures are often accompanied by an array of plants and small animals originating from a childhood spent in her grandmother’s garden. Suzet applies them as symbols, to emphazise the role of women in the community. Because she grew up observing women’s strength, their ability to endure hardships, meanwhile maintaining their positivity.

As an artist she transfers these experiences to the canvas. Suzet uses cactuses as a symbol for the hardships of life. A lobster refers to the many tasks women carry out. The bright sun denotes a woman’s positive attitude because after rain or storm, the sun will always shine again. Ultimately, this is the message she wants to disclose through her work. The unfailing ability of women to endure, care and overcome.

Interesting from this aspect is also the series of objects she made titled Korona di Kabes (Crowns for the head). These were exhibited in the Curaçao Museum during the exhibition Antepasado di Futuro (Forefathers of the Future) in 2010. By creating the Crown series, inspired by the intricate Afro-Caribbean hairstyles, she offered a recognition to the Afro-Caribbean female. A tribute to strong Caribbean women like her mother and grandmother, but also to womanhood.