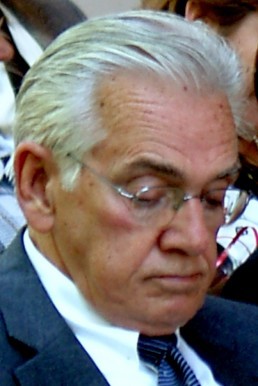 Roald (Ati) Schotborgh (1933-2011) was a so-called autodidact painter. He taught himself painting by copying old masters, like Rembrandt. Gradually his themes evolved to local scenes and colours. His landscapes, city-scapes and architectural paintings were extremely popular with the local public.

His work reveals his love for the island and his passion for painting. Although he is most well known for his city-scapes, he has also painted portraits. He, for example, made portraits of all the directors of the Central Bank of the Netherlands Antilles and of all the bishops the Netherlands Antilles had known.
For his paintings he mainly used brush and/or painting knife, but he also made paintings with acrylic and watercolour.

His style of painting can be labelled as impressionistic realism. As he once said himself: ‘I can paint you a mill, and when you appraise my work you do see a mill, but you are actually looking at nothing but a few specks of color’. He loved the dryness of the island because he was able to see so many different hues and tones of the same colour. Preferably he would paint during the times of drought. But the city also fascinated him as the small alleys of town had this special light that triggered his sense of color. However, he was not limited to impressionistic realism. He also made abstract paintings.

His interest in architecture went beyond paining city scapes. In 2004 he published a booklet  ‘Curaçao Alleys. A journey to nostalgia’, with images and texts about Willemstad.

In 2008 Schotborgh received the honorable commission by the Renaissance Curaçao Resort and Casino in Willemstad for a large painting in the hotel lobby. He created an impressive artwork based on the history of Otrobanda, called ‘The lovers’ bridge’. In former times, on the same site as where the hotel is built, two wooden bridges used to connect the city to the rif, on the opposite side of the water. For this commission he recreated that situation in an abstract, impressionistic style. The vertical, rectangular stripes in the foreground are an abstract rendering of the old wooden bridge, against a background of the colourful two story houses of Otrobanda.

Schotborgh was more than a painter. He started his career as a civil servant working for the island region Curacao. After a honourable discharge in 1984 he started his own business in framing and restoring paintings. He, for example, restored and maintained all the portraits of the Governors in the Palace of the Governor. In 1990 he expanded his business with the help of his wife Ilse Hedwig Quast by starting an art gallery selling paintings, jewels and art and scenery materials.
For more than 35 years Schotborgh provided politial cartoons for the newspaper La Prensa, using the pseudonym Dori Maco.

After his death in 2011, Gallery Alma Blou organized a special exhibition of his work with a gathering where he was commemorated by friends and art lovers.