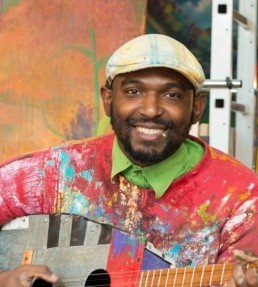 Francis Sling (Curaçao, 1979) is a visual artist, working in Curaçao. He studied graphic design at Grafisch Lyceum Amsterdam from 2000 to 2004.

Aside from his undeniable media presence, the recently turned quadragenarian is a tour de force. A 2017 and 2018 recipient of Amigoe Express’ award for Best Artist, his work is at the very least seductive as well as captivating with an equally strong message. The self-proclaimed poet uses the brush to express his colorful poetry on canvas or any type of surface he’s drawn to. He is also well versed in the ways of sculpting and wood carving, which comes as no surprise. To add a cherry on top, Francis’ other passion, music, comes as easy to him as painting. He has a knack for string and percussion instruments alongside composing and poetry. If painting wouldn’t have panned out, he would have undoubtedly pursued a career in music; a successful one, we’re sure. Curious? Check out his PajaRITA music video here: https://youtu.be/_lPalvAisNE or on his Facebook page.

His online presence allows the public to live vicariously through his vivid world of murals, Rare Para paint workshops, festival residencies like #kitasunu at the Kaya Kaya Festival. More recently, he designed the bar for newcomer carnival group Hats off to Dreams and won! He produces a lot of videos where he takes us through his bombastic process.“My video posts are really an extension of my art, it’s how I communicate and show the public who I am,” explains Francis. He is very much aware that despite the fact that his work is visually loud, not everyone can see its message.“Filming myself is an opportunity to describe my train of thought and art in simpler, profound, and even comical ways.”

Francis’s work is an exploration of the human condition. Human beings are in perpetual pursuit of happiness when it comes to family, career, and especially love. This universal phenomenon is the very thing that flows into his art. His is an exploration of the dichotomy between loving someone and not losing oneself in the process.“The perfect marriage or relationship ideal doesn’t exist. It’s a fabrication we as a society impose on ourselves. The high divorce rate and a number of extra-marital affairs are testaments to this,” explains Francis. His deep analysis of this very subject drives his technique in his lauded mural Three O’Clock Romance in Skálo. “Perfection is an ideal very much like this mural,” explains Francis. From afar it takes your breath away, take a closer look and you see it’s quite messy reflecting life itself. “Not one single thing in nature is linear, so why should we be as human beings,” asks Francis.

His curiosity for existentialism stems from his deeply religious background. He converted to Christianity at a young age and spent much of his childhood on a feverous quest for God that lasted well into his teenage years. He reached a point where he couldn’t find any more answers in religion, at least not in the way it was taught to him. “You can say I evolved from it,” says Francis. Instead, his vigorous search brought his spirit closer to nature. Growing up, he was surrounded by the flora and fauna of Ser’i Fortuna. So when the time came for him to pursue his studies in graphic design in the Netherlands, those memories of the outdoors remained printed in his heart. “The Curaçao landscape is unlike anywhere and I couldn’t get the colors out of my system. I needed to make sure my art had warm and tropical undertones to them. It was my way of staying connected to my home,” explains the artist.

His stunning mural Sunú in Otrobanda emphasizes the importance on revealing your true self fearlessly. Swing Kontentu adds a sense of Euphoria to Landhuis Bloemhof and Frida Kahlo’s face in Aruba need no explanation other than they are examples of his exploration of the human condition. If you wish to chase more of his murals there is a large one at Stichting Felis in Otrobanda, a massive 360 one at the Dolphin Academy and an intriguing one at Byron’s Tattoo shop at Mambo BLVD. Check out his ‘Art Cave’ at Bargestrraat 31A in Skálo for impressive paintings and handmade jewelry. An immersive experience waits you at the very least.

A number of his work in the Netherlands also hang on the walls of private homes. There over seventeen paintings in the Curaçao House in Den Haag, eight are visualizations of the stanzas of Curaçao’s national anthem and two are life size paintings of slave rebellion leaders Tula and Bastian Karpata. In 2013 he was commissioned to paint a mural for the International Youth Hostel Mandala in Xining, a tourist destination in China’s Qinghai Province.

Text by Elizabeth Francisco (2019). Photographs Kaya Kaya by Josée Thissen-Rojer.
This text, in whole or part, may only be reproduced with reference to the source: Curaçao Art®️, www.curacao-art.com, and the author. Copyright of the artworks remains the property of the artist.