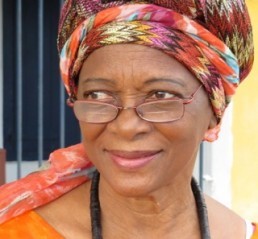 She was married to Nel Simon (1938 – 2022). When they lived in the bario of Stenen Koraal they built their own oven for their studio and created a statue garden.

After their divorce Norva went to the Netherlands and lived in Friesland where she continued her work as a ceramist. She kept her ties with Curaçao by participating in group exhibitions whenever possible.

She has recently moved back to Curaçao. Her first solo exhibit after her return took place at Kas di Kultura in November 2011 and was titled “Perseveransia” (Perseverance).

In 2017 Museum Beelden aan Zee in The Hague organized a large overview exhibition of her artworks, titled ‘Norva Sling, Vormen van Liefde’. In 2018 a selection of this show was also exhibited in Curaçao, at Landhuis Bloemhof. Click this link for our post.

Norva Sling is a recipient of the Cola Debrot prize, which she received in 1991.