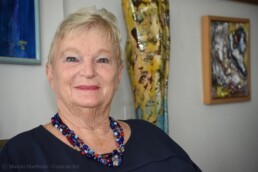 The ceramic works by Marjon Wegman (Curaçao, 1948) are characterized by playful, curved forms that flow together and interact with one another. She sometimes utilizes straight and angular forms, but the curved, soft line always reappears in the work. Her pieces are harmonious, even when she combines different colors, motifs and structures. Marjon makes sure that the parts complement each other, so the work ultimately forms a well-balanced whole.

Curaçao plays an important role in her life, as her place of birth where she spend her childhood and grew up, but also for the inspiration she derives from it. Curaçao is her muse and the abundance of color, the light of the sun, the forms in nature and the movement of the wind, all manifest themselves in her work.

The objects she makes just appear before her in the morning when she wakes up. Every now and then the clay goes in another direction when she’s working with it, and it turns into something completely different. But usually, she creates it the way she visualized it. When she’s working in her atelier, her hands create what she’s pictured in her mind. It’s an intense process, but it’s also her drive to keep going and time and again start working on something new.

Parents
In 1945, Marjon’s father, Eddy Wegman (1918 – 1998), departs for Curaçao from the Netherlands. In Curaçao he works at Shell as Head of Warehouse Services. Eddy Wegman has a great love for photography. Together with his family he often sets out to capture images of the island and its residents. He frequently wins prizes for his photographs. Marjon cherishes her father’s photographs and in 2010 a small selection is put on display in the large retrospective exhibition ‘Curaçao Classics’, curated by Jennifer Smit and Felix de Rooy. Additionally, about a dozen photographs are displayed in the museum at Landhuis Savonet. Eddy Wegman’s photographs are enlarged and printed on linen. For a few years they’re part of the permanent arrangement at the museum. In 2019, Marjon publishes a book of her father’s work. Inadvertently, he captured the island as it was in the forties, fifties and sixties. The book is published by LM publishers and titled ‘Eddy Wegman. Photographs of post war Curaçao. 1945 – 1963.’

Marjon’s mother, Gé Wegman-Reudink (1918 – 2004), is from Zwiep, a small village in Gelderland. Her father was the managing director of the butter factory there. Gé Wegman-Reudink follows her husband to Curaçao a year later. She’s a nurse and on Curaçao she’s active in the social field.

In 1963 the Wegman family repatriates. Marjon is 15 years old at the time. After graduating from MULO, she follows a 5-year training to become a teacher in Needlecraft (Na). She realizes this is not the right course for her but finds an avenue to express her creativity in the subsidiary subject of fabric decoration and discovers her own talent and fondness of colors. Colors that are still an essential part of her creative life today, 50 years later.

In the Netherlands, Marjon teaches courses in egg decoration together with her mother, using various types of materials. She also paints many of the eggs herself.

Return to Curaçao
Marjon returns to Curaçao again for the first time in 1988, after 25 years. Accompanying her is her then-husband, along with their 3 children. After this first trip and reacquaintance with the island, more trips follow that lead to establishing a network of contacts on the island. Curaçao inspires her and her nostalgia is reflected in her art. She incorporates materials in her work that she finds in nature in Curaçao. She notices how these materials spark her creativity.

From 1990 her work is sold on Curaçao through ‘Spanta Para’ – Lusette Verboom’s shop at the Matthey Werf, which is the predecessor of Gallery Alma Blou. It starts off with gourds, sculptured to resemble little bird houses, with all sorts of local animal species inside, such as birds or iguanas, made from Fimo clay. But she doesn’t leave it at that. After her discovery that the leathery leaves of the local Sea grape tree (Dreifi di Laman, Drùif) lend themselves perfectly to being painted on, she starts depicting her nostalgia to Curaçao on these leaves.

In October 2002 Marjon moves to Curaçao together with her new husband, Rien te Hennepe. Promptly after her arrival she has her first exhibition on the island at Gallery Alma Blou, alongside Richard Doest and Rita Cijntje. Her small paintings on Sea grape leaves prove to be very popular. She still does these exclusive, miniature paintings, but only on request.

Marjon discovers mosaic through Yvonne Christiaan. This offers her the opportunity to further explore three-dimensional art and ties in with her fondness of colors. To expand her knowledge of shapes she takes ceramic lessons from Yvonne van Gogh. She often combines these two disciplines in her work.

Marjon’s work is all about esthetics. Beauty is essential and she strives to create beautiful objects. She is very critical of her own work: anything that is not to her liking never leaves the atelier. Still there is more than beauty to her work; there is a message or a feeling that she wants to express through it.

Yin-Yang, in life and art
The small Yin-Yang sculpture is made up of two separate parts that can be interlocked to become one whole. She created it because she felt that the problems with her back brought about a discord in her life, and she so badly wanted her body and brain to come together again. Notwithstanding the surgeries, she will have to accept that her body will no longer function the way her brain wants it to. This feeling of dichotomy is exactly what she wanted to convey in Yin-Yang.

Her new husband, Rien te Hennepe, is a sculptor and works with stones from the table mountain ‘Tafelberg’. They influence each other’s work and at times work together on a project. Rien is her support and anchor, especially now that there’s a lot she can’t do due to her back problems. Marjon’s physical limitations don’t limit her in her artistry. Her hands still allow her to transform her inspiration into reality. When she’s at work in her atelier she even forgets that her body no longer functions optimally, and this gives her strength.

Curaçao grape leaves, minerals and corals
Marjon’s objects are small, aside from a few exceptions, and are shaped organically. She loves integrating materials from nature in her works. A good example are the miniature paintings on Sea grape leaves. In her ceramic work she combines minerals from Curacao’s table mountain ‘Tafelberg’, for example, or fossil corals. Color is an essential element in her oeuvre and Marjon works with exquisitely refined colors that complement each other.

Marjon has had an engaging life but feels privileged that she now lives and works in Curaçao and has the space to create limitlessly.

Posted on March 7, 2021.
Author: Josée Thissen-Rojer.
This text may only be reproduced with reference to the source and author.
Copyright of the artworks remains property of the artist.