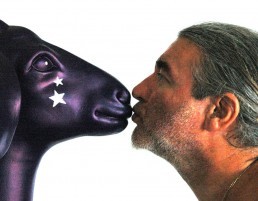 “…Love doesn’t fall from the sky like a dead bird. It is a very active process, and it involves you personally…” (Zanolino).

Philippe Zanolino (France, 1960) came to Curaçao in 1986 and has been part of the visual art scene ever since. Actively exhibiting on Curaçao every two years, he has also managed to represent the island abroad on various occasions at biennals in the Caribbean and international art fairs in Europe.

Philippe has no formal artistic training. As a young adult he quit his medical studies to become an artist. Over the years his work has turned more and more spiritual. It has become his mission to share his spiritual insights by means of his art. Through his colorful paintings he guides the spectator to the profound wisdom of the soul. Most of his work contains various layers of meaning which are not easily revealed to the viewer. But Philippe makes use of  certain symbols which are recurrent in his oeuvre, that assist to unveil the encrypted message. Symbols like the dog, the bird and the white dot are repeated time and again in his paintings. Philippe has a strong motive for choosing these particular symbols as part of his artistic language: the word ‘Dog’ is ‘God’ when read backwards and the flight of a bird in French (his native tongue) ‘Vol’, is pronounced Love when read backwards. The most striking symbol he applies is the white dot. This is in fact a small circular piece on the canvas which has been carefully left untouched by the artist. It refers to the pure and untouched essence of life.
Philippe has recently moved to live on a quieter side of the island, where he can be closer to nature and dedicate himself more fully to his personal mission. He has teamed up with his son Giovani, a talented upcoming artist. Together they present themselves as ‘ZZ Team’.

The ZZ Team had their first large exhibition in the Curaçao Museum from May till September 2012. The show was titled SMALL PEOPLE, Dedicated to humility.

2014: Dream Catcher Curaçao
On February 24, 2014, Philippe Zanolino together with Rene Guillot raised a large Dream Catcher on top of the highest point of Curaçao, the Christoffel-mountain or Seru Kristòf. Their artwork was dedicated to freedom fighters in general and the dream of Martin Luther King in particular. They had deliberately chosen the spot on top of the Christoffel, to create public awareness for their mission. However, the Christoffel mountain is located in a national park and as the management did not approve the idealistic artistic statement, the Dream Catcher was swiftly removed by park rangers and returned to its creators. Although somewhat disappointed, both artists decided that if there was no place in the park for the dreamcatcher, certainly that could not stop their mission. First they took it to the foot of the Ser’i Indjan, a symbolic spot in the middle of nature. Although everyone thought the Dream Cather had reached it’s final destination, that was not the intention of it’s makers. In the following weeks it was taken to the Curaçao Museum, the St. Anna Bay and to the Governor’s Palace.
The Dream Catcher is receiving much attention by public and press. More than it would have gotten on its original location. Future adventures of the Dream Cather Curaçao can be followed on Facebook, click this link.