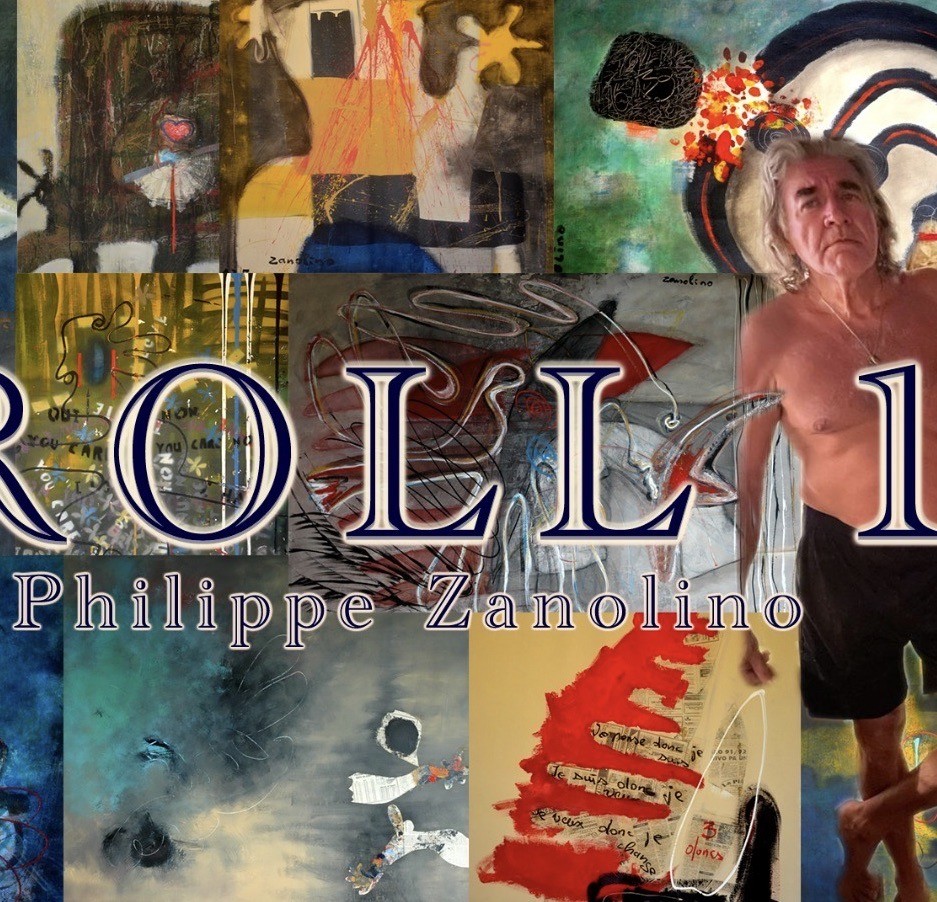 The vernissage of the solo by renowned artist Philippe Zanolino took place Saturday, March 12, 2022. Philippe is excited about the show and also about the fact that the exhibition is held in his son Giovani’s gallery: Zanolino Gallery & Atelier.

Philippe’s exhibition is titled ‘Roll 12’ and features work from the 90s, which were never exhibited anywhere before. The works are from a special period when he painted obsessively as a man possessed. Philippe remembers it very well.

Philippe explains that he sometimes stores his paintings by rolling them -carefully- together. He keeps the rolls with paintings in a corner of his studio, covered with plastic. Of each scroll, he knows exactly what it contains: which paintings, the colors, the theme, and when it was painted. What’s more, he has everything digitally recorded. And yet there was always one scroll, of which he really didn’t know what was in it anymore, and that was Roll 12.

The paintings from this scroll come from the time of his divorce from his first wife, around 1994. A breakup he neither wanted nor was ready for. Caring for his two children and painting kept him going at the time. After the series was finished and dried, he rolled everything up, put it away, and forgot what he had painted. Other rolls were occasionally opened to take something out, but for some reason, Roll 12 always remained untouched.

Recently Philippe decided to finally open Roll 12 in order to document and digitally capture the series. Upon unrolling the works, he was amazed at the quality of the work he found, its remarkably good condition, and the clarity of its colors. Philippe realized that the work was a treasure touched by daylight for the first time. The decision to exhibit a selection from the roll was quickly made.

Normally Philippe exhibits his work in Gallery Alma Blou, owned by Lusette Verboom, with whom he has a good relationship. But last year son Giovani opened his own gallery and Philippe feels it’s his loving duty, as a father, to exhibit there. The title of the exhibition, “Roll 12,” refers to the scroll in which the works were preserved for almost 30 years. Of course the choice for the date of the opening, on the twelfth of the month, also.

Philippe has been living in Bandabou for a long time and leads a reclusive existence there. He meditates daily and follows the teachings of the Indian guru Sathya Sai Baba (1926-2011). For two years he is married to Ingeborg Bosch and with her by his side he feels profoundly happy. Compared to 30 or even 10 years ago, his life has changed significantly and has become much calmer.

What strikes Philippe most about the works from Role 12 is that they show him that, even back then, he was already unconsciously involved with the spiritual world that now guides him. But in 1992 he had not yet met his guru and his outlook on life was very different. In fact, for him, these paintings are a confirmation of his own philosophy, namely that as an artist he is guided by a higher power.

“Of course, you fight it, in the beginning,” Philippe says thoughtfully. But at some point, he had to accept that as an artist he should not follow his mind, but his heart. He points to the blue field in the 1992 painting “Main et pied de couleurs”, and the figure in the lower right corner who excitedly and ecstatically wants to move toward the blue and the bird. When he painted this he was not aware of the significance of blue as the source of consciousness, or of the bird as a symbol of love. And yet, even then, he made this work, which exactly reflects his philosophy.

“With my art, I make the invisible visible,” Philippe explains. “I do not imitate reality, but rather share my experiences with you. It is an experience that you may not be able to understand immediately, but you can still accept it”. With his paintings and passionate approach to the spiritual aspect of his work, he gets his audience thinking, and often his work touches something fundamental in people. Just as he himself had to accept that he had to paint from the heart, he likewise notices that his works open the heart of others. “Art does that”, Philippe points out, “Art opens the Heart”. 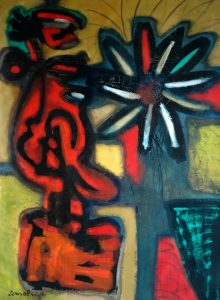 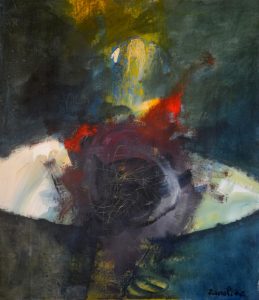 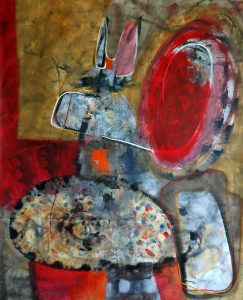 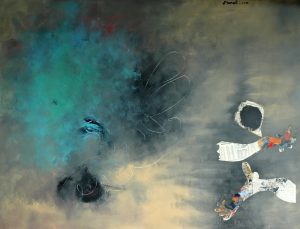 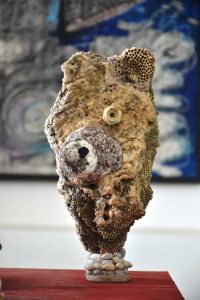 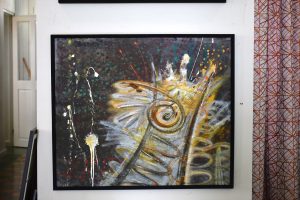 The painting “Homme avec fleur déracinée,” from 1993, shows a figure, standing in a plant pot, holding a gorgeous flower. The roots of the plant hang limply beside the other, empty plant pot. It is quite a large canvas, but the action taking place is rather simple. The work reveals the self-assuredness of the artist and the red color, sharp contrasts, and black contours make it a poignant painting.

‘Homme avec fleur déracinée’, Man with uprooted flower, is, like many of his paintings, an autobiographical work. It is a depiction of the situation Philippe was experiencing at the time. The flower is uprooted because Philippe felt uprooted himself. Actually, the figure is not looking at a flower, but at his own heart, because his life has been uprooted and turned upside down. Philippe believes that sometimes we need to look inside and do some serious self-reflection, to gain an understanding of our situation. But once the obstacles of life are overcome, the flower blooms in all its splendor. The figure standing in the plant pot has now been able to take root in new soil and is once again standing strong in life.

Philippe has 50 works lined up for the new exhibition. The paintings from the early 90s are both powerful and colorful. Especially the paintings from 1992, the period of his divorce, are energetic and full of movement, but also reveal a controlled build-up. Titles such as ‘Desertude’ (Abandonment), ‘Mauvaise herbe’ (Weeds), and ‘Scream’ emphasize his emotional state.

Philippe’s paintings from the second half of the 1990s show a different artistic language, where he is instead concerned with geometric forms such as the circle and the square. These are forms that he was already working on in 1991, and which then reappear again.

The still later works show the Philippe that we are now familiar with. These are the paintings with a lot of blue and titles like “Trust for wisdom” and “There is nothing but God. A striking and roguish work is the self-portrait ‘Happy idiot’. With appropriate self-mockery, he portrays himself as a misfit, happy in his own world.

In addition to the paintings, there are of course the ‘Love Warriors’, small sculptures with a big heart, as he calls them. The sculptures are composed of all kinds of materials that he encounters in nature: coral, shells, random objects, and always a small piece of deep-blue glass as a symbol for the spiritual world through which he lets himself be guided.

Philippe is excited about the new collaboration with his son as a gallery owner. He admires that Giovani manifests himself as an artist in a very unique way and is very successful. After the exhibition, Philippe will start thinking about the rest of the year. In all likelihood, he will go to France for a few months, but he cannot predict more than that. One thing he does know for sure: he will meditate every day to stay in touch with the blue.

Previously published in Amigoe, on Friday, March 11, 2022. Photographs by Ken Wong. This text, in whole or part, may only be reproduced with reference to the source: Curaçao Art®️, www.curacao-art.com, and the author. Copyright of the artworks remains the property of the artist. 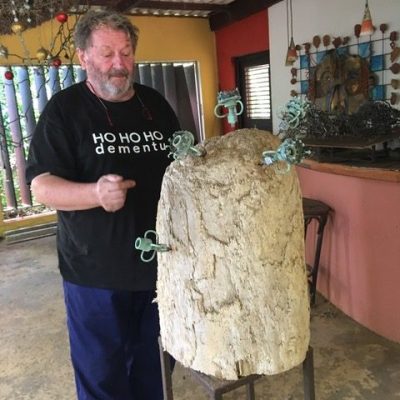 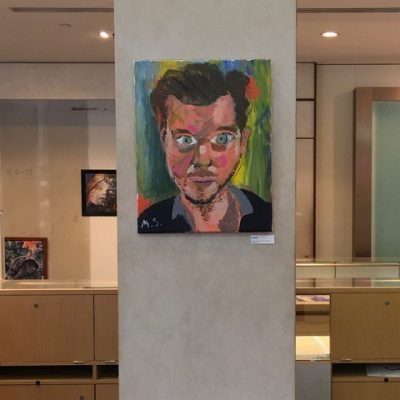 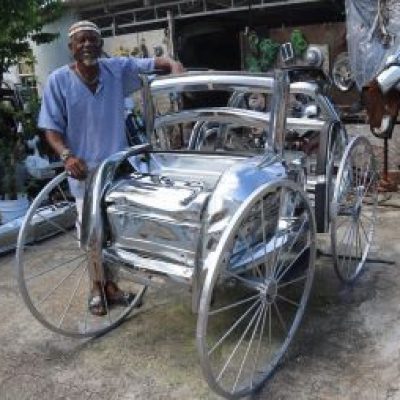 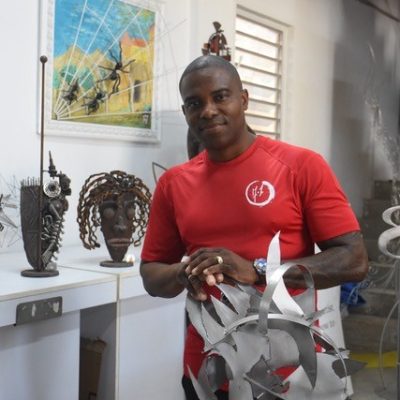