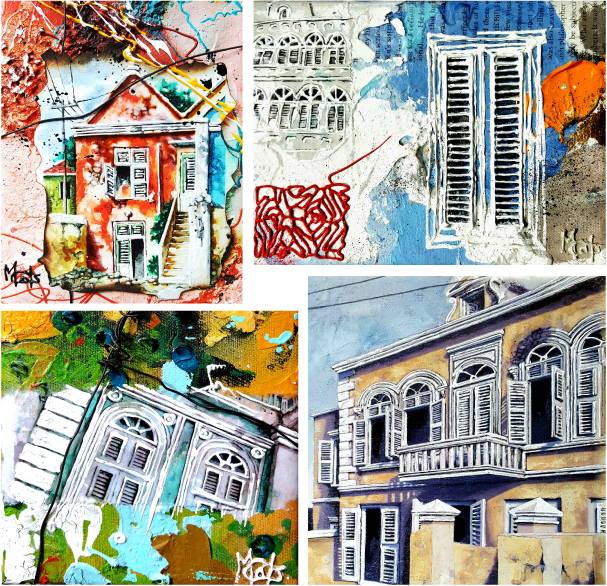 Curaçao is her home base now, but Marianne Cats was actually born in Bali (Indonesia) with a Dutch nationality.

She grew up in many countries throughout Asia, East Africa and South America. While residing in Brazil, Ecuador and Africa from 1980 until 1984, her interest in art developed, and she started to draw and paint. After attending workshops and art courses in sculpting and painting, she had her first exhibitions in Guayaquil and Quito (both in Ecuador).

She moved to Curaçao in 1985 and was immediately impressed by the beauty of the island’s colors and by the architecture of the old buildings.

Being an architect herself, she and her husband established an architectural office where they not only design modern buildings but also specialize in restorations of historical buildings, such as old city buildings and plantation homes.

Artist on the move
When asked to what genre her art work belongs to, she takes a while to think about it, because she is continuously exploring new techniques in her drawings and paintings. Marianne is part of a group of artists who focus on monument buildings and historical cityscapes. She has recently started experimenting with mixed media, and she often incorporates small objects into her paintings, giving an effect of bas-relief. Marianne is well known for her aquarelle buildings and acrylic paintings on canvas. Nowadays, she is exploring abstract art as well.

Inspiration
Marianne has a deep admiration for the artwork of Maurits Cornelis Escher and Egon Schiele. She uses M.C Escher for inspiration, as Escher draws with lots of perspective, and just when you think what he drew disappears into nothing, it always finds its way back to the beginning. And although not her style, Marianne loves how E. Schiele plays with lots of contours and lines in such a way that it keeps on fascinating the spectator. But she is also inspired by the vibrant colors of the island, the iconic historical buildings and the mesmerizing ambience in which all of those are set. Her mother had a tremendous influence on her during her youth, pointing out fascinating buildings and their surroundings. There was always an interesting story behind the things she pointed out. This adventurous observation had a tremendous impact on Marianne, which you can clearly see in her paintings: “Each painting is a new experience, because I never know how it is going to turn out”.

Sunday Morning in Willemstad
When asked to name a painting which means a lot to her, she immediately named “Sunday Morning in Willemstad”, which is a perspective view of the Breedestraat Punda, the main street of the city, which visually disappears into the St. Anna bay. Strong rhythmic architectural perspective, an impressively colored blue sky, and the entire painting is filled with a playful contrast of light and shadow. The painting was entirely created with a broad palette of pastel paints. This particular painting means a lot to her since the creation of this piece took such a long time. Lots of sketches, lots of photos and a lot of difficulties while she was trying to create it. However, this also came with a tremendous feeling of satisfaction when her hard work and artistic view was recognized by the Maduro & Curiel’s Bank, who ended up purchasing this amazing work of art.

Marianne Cats has acquired a great fan base since she started her artistic career. Her new artistic exploration and experimentation with abstract concepts, has her fans very excited.

Click here for more information on her 2017 exhibition in the art gallery of Landhuis Bloemhof: Dimensioneel Lijnenspel.