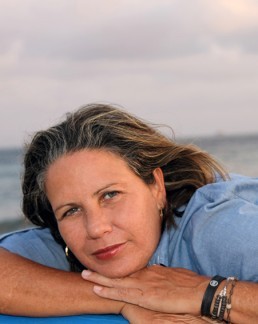 The universal language of art
For Ariadne Faries art is universal. “My paintings are abstract and may therefore not be easily understood. But whenever someone takes the effort to really look at my work, my original intention is always discovered. That is how I experience the universality of art.”

The wooden clothes-peg
The art of Ariadne is firmly rooted in her own world. She paints her life, her emotions, her opinions and her observations. Showing the world when she is hurt or confused, angry or feeling strong. She also paints what fascinates her, as if trying to dissect the object of her fascination,  investigating it till she’s finally able to wholly understand it. For this process she may use paint, objects and photography. Anything that may help her express herself. This is how she, in her early years as an artist, somehow picked up a wooden clothes-peg and started drawing lines with it in the wet paint. The effect being much to her liking and she continued using it. Since her exhibit ‘Laberinto’ (Labyrinth) in 2003, ‘the clothes-peg drawn line’ is her trade-mark.

“In the beginning when I first started to use the clothes-peg as part of my technique I did it almost haphazardly. It was as if I was pouring out my emotions over this tiny piece of wood. Now, I apply it consciously, more in service of creating my paintings. Over the years I have refined the way I handle this tool and the effect I want it to create.”

The Black Nun
Her painting of ‘The Black Nun’, is inspired on the Angolan non she meets in 2008. This work can be interpreted as a symbol for the Mission on Curaçao. The Roman Catholic Mission from The Netherlands has been quite influential on the island. Among other things, schools are founded, convents built and the hospital is constructed . All this provides the catholic church a strategic position and direct influence in the local community. For the artist the painting also has a more personal and deeper meaning: it symbolizes her own struggling with and eventual acceptance of the church. Moreover it also describes her own identity, “My skin is white, but on the inside I feel like I am more black than white.”
The painting is chosen three times, by different curators for theme exhibits. In 2010 ‘The Black Nun’ is shown in ‘Antepasado de Futuro’ an overview of the visual arts on Curaçao from 1900 to 2010, curated by Jennifer Smit and Felix de Rooy. For ‘Island Reflections’, curated in 2011 by Suzanne Wilczak , the painting travels to Michigan, US. In 2012 it is part of the exhibit ‘Caribbean: Cross-roads of the World’ in New York.