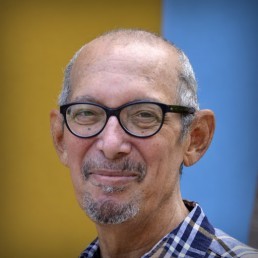 Tony Monsanto was born on Curaçao in 1946. He graduated at the Rijksakademie voor Beeldende Kunsten in Amsterdam in 1969 and after that studied architecture at the Delft University of Technology in The Netherlands.
Since 1992 he was a full time artist. After living abroad for a number of years he returned to Curaçao in 1999. Tony Monsanto passed away in Curaçao on January 25, 2014.

“My work incorporates contemporary issues, like environmental and social subjects, dealing with the complexity of our Caribbean identity and reality. Migration of our people to the economical centers causes a brain drain and stagnation of our economy. Some, as a reaction to the demands of the harsh reality, seek mental support in the mythical world of ancestral African religions. While the stereotype images combine clear blue waters, sandy beaches, palm trees, cool cocktails, tanned bodies, drum beating musicians, carnival parades and attractive dancers into a picture postcard view of the Caribbean, the population is struggling with unemployment, low income, political indecision as part of post-colonialism, as well as drug, gambling and alcohol addiction.” (Tony Monsanto)

“Dutch Caribbean artists have regularly been contributing to the biennials in Havana and Santo Domingo… Tony Monsanto has played a significant role in the creation of this greater visibility for the modern art of Curaçao. …It is gratifying to observe the strength with which Monsanto reinvigorates painting. He is thoroughly imbued with the aura provided by Caribbean light and color. He has made a thorough study of both the history and the multiplicity of cultural legacies of the area, and het has incorporated both direct and discreet references to Caribbean legends, Afro-Caribbean traditions, religious complexity and the diversity of ethnicities in the area. His highly expressive paintings capture many of the quintessential qualities of the social conundrum that is the Caribbean in today’s globalized and multicultural world.”
Edward J. Sullivan PHD, Chairman Department of Art History Acting Dean of Humanities, NYU.